Enter the world of Tibetan calligraphy with Tashi Mannox, Dharma artist and one of the world’s foremost contemporary Tibetan calligraphers, in this eight-week course. In this course, Tashi guides students through setting up and constructing each of the Tibetan letters in the popular Uchen script, including how to make and use the foundational grid that serves as the basis for each letter.

Tashi also gives detailed instructions on the order and technique of each stroke used in constructing each of the 30 letters and the vowels, maintaining the intended sacred proportions of the Tibetan Uchen script. Along with nine course videos, students will have access to a list of suggested materials, reference images for each letter, forums for students to share their work, and practice instructions and quizzes to help develop a confident calligraphic style.

Welcome to your Tibetan calligraphy adventure! In this first lesson, Tashi Mannox provides an introduction to and overview of the course, as well as instructions on preparing guidelines. Tashi then gives a general overview of different Tibetan writing styles and some of the traditional methods of learning calligraphy. Setting up a ruler and guidelines in order to form a grid serves as the foundation to maintaining the enlightened proportions.

In this lesson, Tashi begins the first group of four letters, all guttural in pronunciation, starting with the first letter, Ka, and proceeds through the next two letters, Kha and Ga.

In lesson three, Tashi completes the first group of guttural letters with Nga, and guides building the second group of palatal letters, from Cha to Nya.

In lesson four, Tashi instructs on the dental group of letters from Ta to Na, and begins the fourth group, labial letters, with Pa.

Tashi finishes the seventh group of mixed and high tones letters from La to Sa, as well as the eighth group, Ha and Aa.

The vowels and Yikgo punctuation are taught in this final lesson. 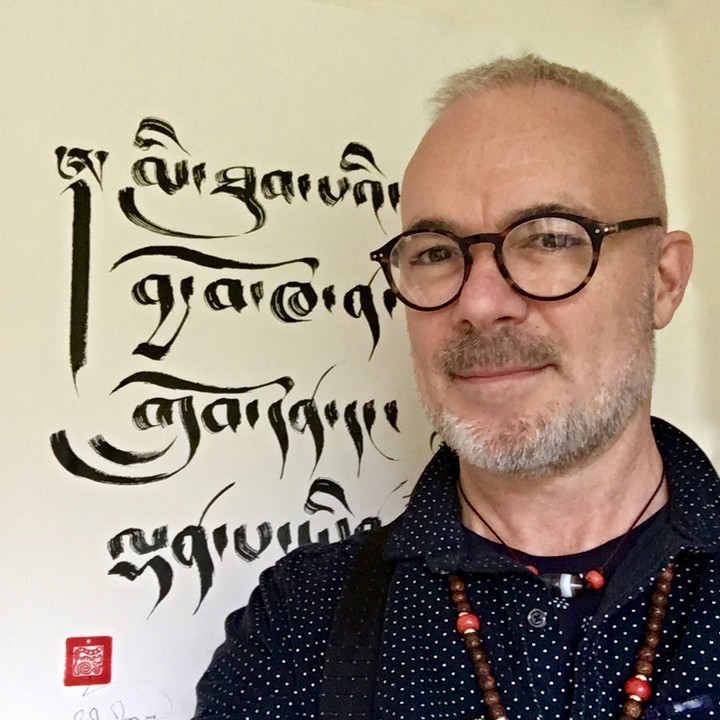 Born to a Buddhist family in the United Kingdom, Tashi Mannox first took notice of the Tibetan language at about the age of 13, when he spent time with two Tibetan Lamas. At the age of 22, Tashi himself took the precepts of a Buddhist monk. Being artistically inclined, he developed his Tibetan writing skills while working as a scribe. This labor of devotion and discipline honed his skills, not just in the classical Uchen script, but the many other Tibetan script styles. His teachers in Tibetan calligraphy include H.E. Tai Situ Rinpoche and Akong Tulku Rinpoche, and he has studied Lantsa Sanskrit with Lama Pema Lodrup of Dharmsala. Since leaving his monastic lifestyle, Tashi has continued working in the preservation and conservation of the Tibetan writing systems. In response to an ever-growing interest in Tibetan Calligraphy, he teaches master classes and lectures worldwide, including at Oxford University and the Rubin Museum of Art in New York City. In recent years, Tashi was invited to help re-establish the (Tibetan) Bhutanese calligraphy tradition to the kingdom’s educational and monastic institutions. The Khenpo of the central monastic body of Bhutan gave Tashi the honored title of Ambassador of Bhutanese Calligraphy. Tashi is now recognized as one of the world’s foremost contemporary Tibetan calligraphers and dharma artists, exhibiting his masterpieces internationally, including at the Moscow Calligraphy Museum, the Sharjah Calligraphy Museum in the United Arab Emirates, and the World Calligraphy Biennale of Jeollabuk-do in South Korea. Tashi is also the author of Sacred Scripts, which was endorsed by His Holiness the Dalai Lama.