The Center for Contemplative Research

Momentum is building at the leading edges of theoretical physics for a fundamental flip in the established view of reality, and a new organization in Crestone believes it has something important to contribute. The Center for Contemplative Research, which recently purchased Nada Hermitage, believes that a collaboration between highly-trained meditators experientially probing the nature of consciousness and the growing number of physicists and cognitive scientists who believe that consciousness is more fundamental in nature than matter, energy, and even space-time has the potential to upend 150 years of scientific orthodoxy. The implications of such a paradigm shift would be felt not only in physics, but in all fields of science and their applications in medicine, psychology, and even in cultural definitions of personal well-being.

The challenge to the scientific community was voiced in an opinion piece in the May 2018 online Scientific American titled, “Coming to Grips with the Implications of Quantum Mechanics.” Co-authored by theoretical physicist Henry P. Stapp–who in his long career worked closely with three giants of 20th  century physics, Werner Heisenberg, Wolfgang Pauli, and John Wheeler–the essay plainly presents a new frontier for exploration.

“Taken together, these experiments indicate that the everyday world we perceive does not exist until observed, which in turn suggests… a primary role for mind in nature. It is thus high time the scientific community at large—not only those involved in foundations of QM—faced up to the counterintuitive implications of QM’s most controversial predictions.  …All matter— not only that in living brains—is the outer appearance of inner experience, different configurations of matter reflecting different patterns or modes of mental activity. …. Lest we continue to live according to a view of reality now known to be false, we must shift the cultural dialogue towards coming to grips with what nature is repeatedly telling us about herself.”

In coming to grips, with this new reality, the question naturally arises, if consciousness rather than physical phenomena is primary, how can consciousness, which has no physical properties, be studied by methods that were invented to probe configurations of mass and energy in space and time?

As B. Alan Wallace, the founder and visionary behind CCR wrote recently, “It is a widespread, and usually unquestioned belief within the scientific community that all states of consciousness and mental processes arise from the brain. But this is an implication of the metaphysical belief of materialism—namely, that all natural phenomena consist of matter and its emergent properties—and not one based on compelling empirical evidence. …Due to the ideological and methodological constraints of materialism, the cognitive sciences have still failed to produce a “telescope for the mind,” namely, a form of highly-trained meditative concentration, imbued with refined skills of introspection and mindfulness.”

The Center for Contemplative Research will provide the rigorous training and support required for meditators to develop the introspective technology that will enable a true collaboration with scientists who wish to explore the implications of the primary role of the mind in nature. 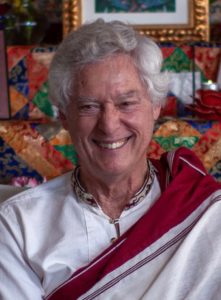 Alan Wallace, or Alan, as he is known to colleagues, is superbly qualified to nurture this collaboration between meditators and scientists. In 1971 he left his college studies and moved to Dharamsala, India to study Tibetan Buddhism, medicine and language. He was ordained by H.H. the Dalai Lama, and, over 14 years as a monk, he studied with and translated for several of the generation’s greatest Tibetan lamas. In 1984 he resumed his Western education at Amherst College where he studied physics and the philosophy of science. He then applied that background to his PhD research at Stanford on the interface between Buddhism and Western science and philosophy. Since 1987 he has been a frequent translator and contributor to meetings between the Dalai Lama and prominent scientists, and he has written and translated more than 40 books. Along with his scholarly work, Alan is regarded as one of the West’s preeminent meditation teachers and retreat guides, and he is the founder and director of the Santa Barbara Institute for Consciousness Studies as well as the Center for Contemplative Research.

After a 13-year, world-wide search for a home for CCR, Alan last spring discovered Nada Hermitage in Crestone.  He instantly recognized in the 110-acre facility the ideal setting for the full-time, solitary training in time-tested Buddhist meditation techniques required to cultivate the “telescope of the mind.”

H.H. the Dalai Lama, an enthusiastic supporter of the project, gave the name Miyo Samten Ling (Hermitage of Unwavering Samadhi) to the facility itself.  In an endorsement letter, the Dalai Lama wrote, “I am delighted that the Center for Contemplative Research … has taken up the challenge in not only offering opportunities for rigorous mind-training, but also in supporting collaborative research by practiced contemplatives and scientists. Together they seek to explore the inner sources of mental conflict and distress, the roots of genuine well-being, and the origins, nature and potentials of the mind.”

As the Dalai Lama stated, CCR is dedicated not only to supporting a paradigm shift in the established view of reality but also in researching how meditation can promote genuine well-being. Miyo Samten Ling, or Samten Hermitage as it is known locally,  will at last provide the ideal conditions to continue and extend the research begun in 2007 by the Shamatha Project, a six-month scientific investigation into the physical and psychological benefits of meditation that is still widely recognized as one of the most ambitious and comprehensive longitudinal studies of meditation ever conducted.

The Shamatha Project was conceived by Alan in collaboration with Clifford Saron, director of the Center for Mind and Brain at University of California, Davis.  Saron coordinated a team of over 40 scientists from universities throughout the United States and Europe to study 60 participants selected for two intensive 3-month meditation retreats led by Alan at Shambhala Mountain Center in Colorado. The enormous amount of data collected by Saron and his colleagues, included blood samples, EEG readings, questionnaires, video-recorded interviews, audio diaries, and the results of seventeen different computer-based experiments. Results of the published peer-reviewed studies show that intensive contemplative training sharpens and sustains attention, enhances well-being, and leads to less judgmental, more empathic emotional responding to the suffering of others.

One of the most interesting studies of the biological effects of intensive meditation suggests there may be benefits right down to the level of chromosomes. At the end of the retreat, blood levels of telomerase, an enzyme that can rebuild and lengthen telomeres, the sequences of DNA at the end of chromosomes, was on average 30 percent higher in the meditators than in the control group.  Telomeres tend to get shorter every time a cell divides and when telomeres drop below a critical length, the cell can no longer divide properly and eventually dies. Researchers are not claiming at this stage that meditation can slow the aging process, but as Saron has said, findings like this should motivate further research.  The Center for Contemplative Research hopes that its collaboration with scientists will support the development of the field and lead to greater insight into how training the mind can have lasting physical and psychological benefits.

There are now three resident staff members and four volunteers working to welcome the first group of ten long-term retreaters to Miyo Samten Ling around October 15.  Alan Wallace will closely guide and instruct the retreaters in the practices of shamatha, vipashyana, and Dzogchen with frequent online meetings until a time soon when he takes up residence at Samten Hermitage six months a year.

Alan summarized the aspirations of CCR recently writing, “As we learn to integrate contemplative and scientific discoveries about the whole of reality—and not just about some imagined external world that is thought to be comprised solely of matter and energy—we may catalyze a true revolution in the mind sciences, with repercussions for all other branches of the natural sciences. In addition, we may help bring about a renaissance in contemplative inquiry for all the major religions of the world. Through this union of religious and scientific insights, humanity may be poised to re-envision the meaning and potentials of human existence, and by drawing on the natural resources of the human spirit, we may together preserve and enhance human civilization in ways never before imagined.”

All those at the Center for Contemplative Research working to bring this vision to life are grateful to Father Eric Haarer and Connie Bielecki of Nada Hermitage for their support and boundless kindness during the transition from one hermitage to another.  They are also grateful for the warm welcome received from those they are beginning to meet at the long-established spiritual centers of Crestone and from the merchants and residents of this unique community.

Photos of the new Center for Contemplative Research land in Colorado, courtesy of Alan Wallace: 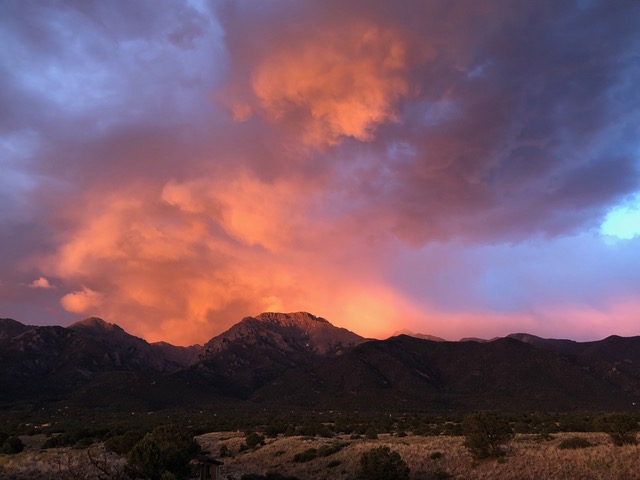 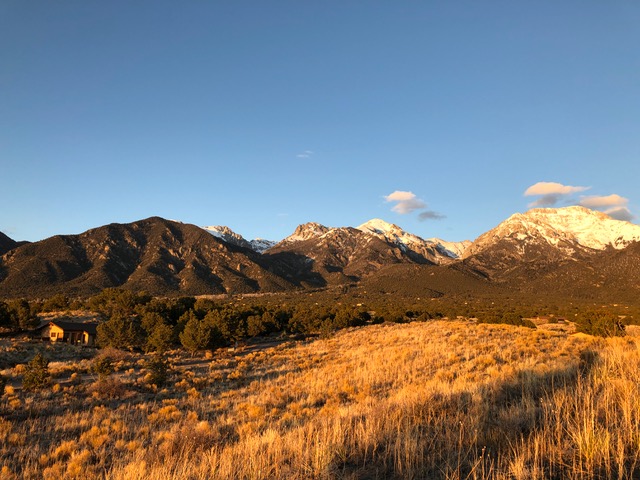 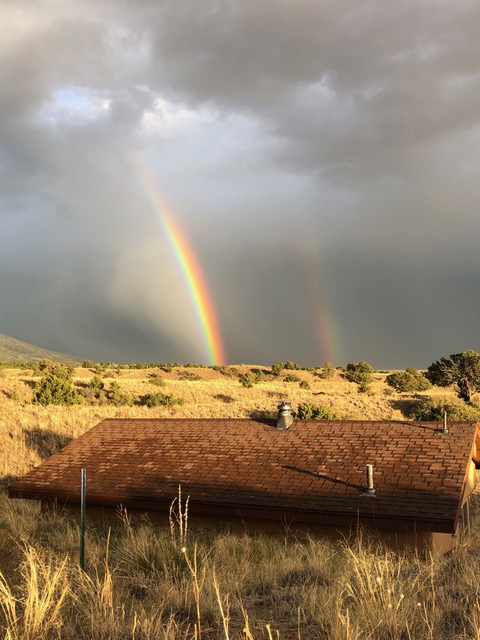 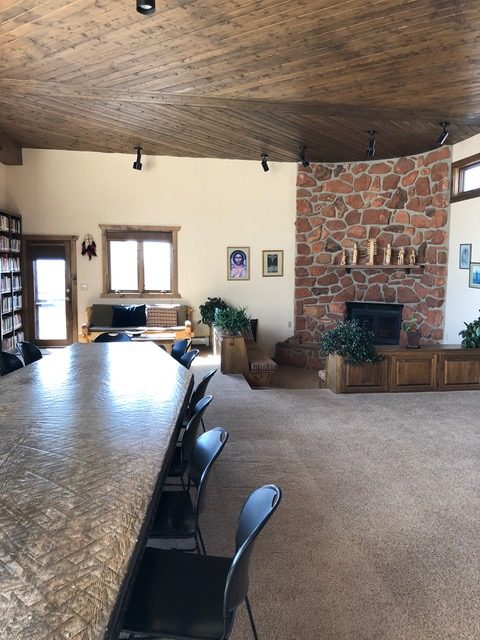 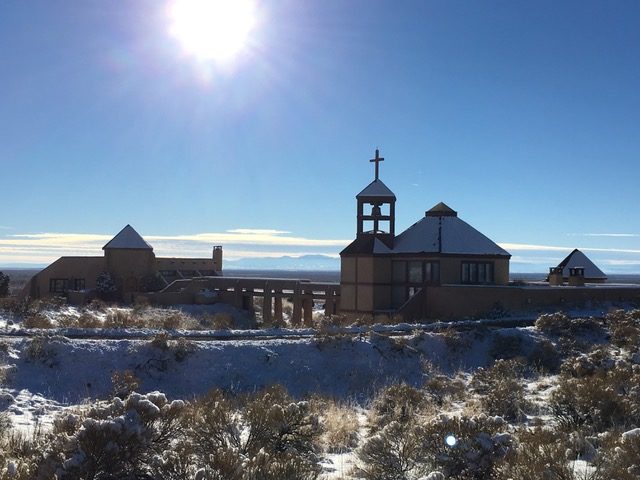 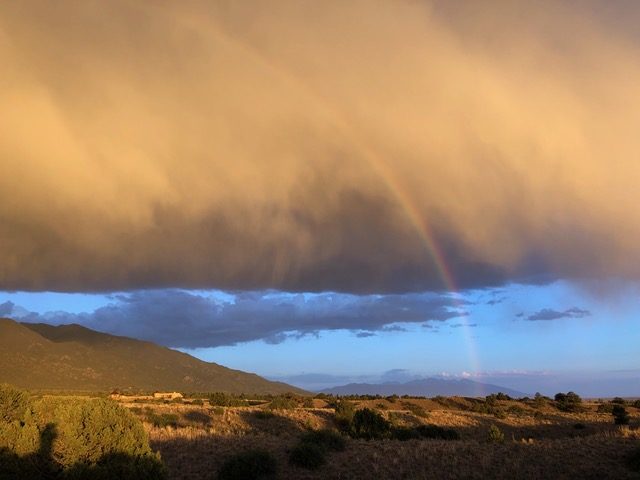 Agape and Chapel in the distance