The Dalai Lama with Greta Thunberg and Leading Scientists

A Conversation on the Crisis of Climate Feedback Loops 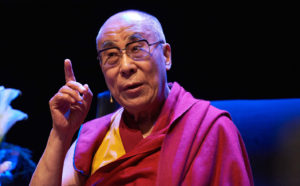 We’re excited to share that you can join the official launch event of Climate Emergency: Feedback Loops on January 9, 2021 at 10:30 p.m. EST sponsored by the Mind & Life Institute.

The dialogue between the Dalai Lama and Greta Thunberg will include climate scientists Susan Natali and William Moomaw and will be moderated by Diana Chapman Walsh.

The event will feature clips from the Climate Emergency: Feedback Loops films, and will be live-streamed in 14 languages on the official website and Facebook page of the Office of His Holiness the Dalai Lama for your convenience.

You can view the conversations on the following four websites:

mindandlife.org (Register here to receive reminders and the link to watch the recorded video the next day.)

The Earth is warming the Earth. In this series of five short films, learn why natural warming loops have scientists alarmed—and why we have less time than we think. Subtitled in 20 languages.

Fossil fuel emissions from human activity are driving up Earth’s temperature—yet something else is at work. The warming has set in motion nature’s own feedback loops which are raising temperatures even higher. The urgent question is: Are we approaching a point of no return, leading to an uninhabitable Earth, or do we have the vision and will to slow, halt, and reverse them?

The world’s forests are responsible for removing a quarter of all human carbon emissions from the atmosphere and are essential for cooling the planet. But that fraction is shrinking as the three major forests of the world—tropical, boreal, and temperate—succumb to the effects of climate feedback loops. The resulting tree dieback threatens to tip forests from net carbon absorbers to net carbon emitters, heating rather than cooling the planet.

Permafrost, an icy expanse of frozen ground covering one-quarter of the Northern Hemisphere, is thawing. As it does, microscopic animals are waking up and feeding on the previously frozen carbon stored in plant and animal remains, releasing heat-trapping gases as a byproduct. These gases warm the atmosphere further, melting more permafrost in a dangerous feedback loop. With permafrost containing twice as much carbon as the atmosphere, its thaw could release 150 billion tons of carbon by the end of the century.

The reflectivity of snow and ice at the poles, known as the albedo effect, is one of Earth’s most important cooling mechanisms. But global warming has reduced this reflectivity drastically, setting off a dangerous warming loop: as more Arctic ice and snow melt, the albedo effect decreases, warming the Arctic further, and melting more ice and snow. The volume of Arctic ice has already shrunk 75% in the past 40 years, and scientists predict that the Arctic Ocean will be completely ice-free during the summer months by the end of the century.