AN EXCERPT FROM MANUAL OF INSIGHT

The practice of morality is not as exhaustive for laypeople as it is for monks. The purposes of laypeople are served by either the five precepts or the eight precepts topped with right livelihood (ājīvaṭṭhamakasīla). One may wonder how these two forms of morality can serve equally well when some of their precepts differ. It is because their “Dos and Don’ts” are fundamentally the same.

On the other hand if one observes the eight precepts topped with right livelihood, by inference one is also supposed to refrain from alcoholic drink and any illegal drugs. These behaviors are considered indulgence in sensual pleasure and are therefore included in the precept concerning sexual misconduct. Thus proper observance of the eight precepts topped with right livelihood is basically the same as the five precepts. So whether one keeps one or the other of these two kinds of morality, it amounts to purification of conduct.

The five precepts are universal and exist whether or not the Buddha’s teaching exists. They apply equally to all human societies regardless of time or place. To break the five precepts necessarily constitutes an offense, while observing them necessarily creates merit. That is simply the way it is. It is not something that was decided by the Buddha. 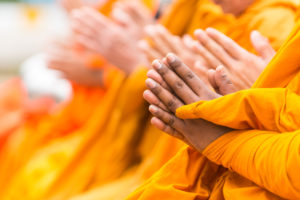 There is a difference, however, between a layperson and a monk’s observance of the eight precepts topped with right livelihood: it is an offense for a monk not only when he seeks the four requisites in ways not approved by the code of monastic rules but also every time he uses the requisites gained in those ways. This is only a violation of right livelihood for laypeople, however, while they are committing bodily or verbal acts that are transgressions concerned with their livelihood. It is not an offense for them when they use materials they have improperly sought. This is because use alone does not involve committing any bodily or verbal misdeed, such as killing, etc. Using materials improperly sought is not a violation of a rule established by the Buddha for laypeople, as it is for monks. So it is not absolutely necessary that a layperson relinquish what he has obtained by unethical means. Simply making the determination not to continue indulging in wrong livelihood can purify a layperson’s livelihood. Keeping in mind the purpose for using the four requisites pertains only to monks. Laypeople may use the requisites without considering their proper purpose. However, laypeople too may certainly enjoy the benefits of this kind of morality, thereby increasing merit and decreasing demerit.

Restraint of the senses, as explained above, is difficult to fulfill prior to practicing meditation even for monks, not to mention laypeople. In any event, the practice of meditation fulfills all four kinds of morality. This will be clarified later. There is no basis in the Pāḷi texts for the idea that these four kinds of morality should be purified for many days, months, or even years prior to taking up meditation. For monks, breaking the monastic rules interferes with their prospects for enlightenment. Therefore, for them this morality must be purified before starting meditation. However, none of the texts mention how long a monk must purify his morality before beginning to practice. So a monk can begin to practice the minute he fulfills the monastic precepts. This is also true of the moral precepts for laypeople. One can attain concentration, insight knowledge, path, and fruition the moment one’s perfections are well enough developed.