Passage to the Next Life

A Translation of a Sutra

from Questioning the Buddha

Peter Skilling is a special lecturer at Chulalongkorn University, Bangkok, and an honorary associate, Department of Indian Subcontinental Studies, University of Sydney, Australia. Until his retirement in 2017, he was a professor of the French School of Asian Studies (EFEO) based in Bangkok. He was awarded an honorary doctorate in the humanities by Chulalongkorn University in 2020. He is an honorary member of the Siam Society, Bangkok, and in 2017 he was elected an honorary fellow of the Asiatic Society of Mumbai. He has published widely on the Buddhist literature, history, and epigraphy of South and Southeast Asia.

The following excerpt is a translation of a sutra from his new book, Questioning the Buddha.

Passage to the Next Life

Homage to all buddhas and bodhisatvas.

This is what I have heard. Once the Fortunate One was staying at Kalandakanivāsa in the Bamboo Grove at Rājagṛha with a large community of 1,250 monks and large numbers of bodhisatvas, great beings. At that time, surrounded and honored by an assembly of many hundreds of thousands, the Fortunate One taught the Dharma: he proclaimed the spiritual life that is good in the beginning, good in the middle, and good in the end, that is excellent in meaning and excellent in letter, that is uncontaminated, complete, perfect, and pure.

At the same time the king of Magadha, Śreṇya Bimbisāra by name, left the great city of Rājagṛha in royal pomp and splendor and set out for the Bamboo Grove where the Fortunate One was staying. When he came into the Fortunate One’s presence, the king bowed his head at his feet in veneration and then circumambulated him three times. He sat down at the side, and he put this question to the Fortunate One:

“How is it, Fortunate One, that deeds that have been performed and stored up, that were done with long, long ago, come to the fore and appear in the mind when the moment of death arrives? If all composite things are empty, how can deeds be imperishable?”

The Fortunate One answered the king of Magadha, Śreṇya Bimbisāra, as follows:

“No, Fortunate One, she does not exist.”

“Great King, what do you think? If this man falls head over heels for that gorgeous dream woman, would that be intelligent?”

“No, Fortunate One, it would not. Why not? This enchanting dream woman is totally nonexistent, and she is nowhere to be found—not to speak of the pleasure of making love to her. Nothing would come of it, except that the unfortunate man would torment himself and wear himself out.”

"The moment of death approaches, and the period of life determined by the results of this person’s previous actions comes to an end."

The Fortunate One said this. Having done so, he, the Sugata, the Teacher, then spoke these verses:

All these things are only names,

and they exist only as concepts.

What is expressed does not exist

apart from the expression itself.

The names that we use

to refer to dharmas

do not exist in those dharmas;

this is the true nature of dharmas.

Name itself is empty of any name.

It does not exist in any name.

All dharmas are nameless,

but they are expressed by means of names.

These dharmas do not exist.

They arise from thought.

Even the thought that thinks of emptiness,

that thought does not exist.

When the One with True Vision teaches

to the worldly in their deluded pride.

The Guide explained that sight

arises from a complex of causes;

the Intelligent One said this

as a conceptual approach to the ultimate.

The eye does not see visible forms.

The mind does not know dharmas.

This is the highest veracity,

which the world does not fathom.

When the Fortunate One had spoken, the king of Magadha, Śreṇya Bimbisāra, the bodhisatvas, the monks, and the world of gods, humans, asuras, and gandharvas were all delighted, and they praised the Fortunate One’s teaching.

This concludes the exalted discourse of the Great Vehicle entitled Passage to the Next Life.

"All these things are only names,
and they exist only as concepts.
What is expressed does not exist
apart from the expression itself." 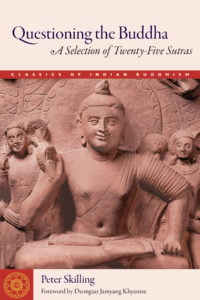 In the forty-five years the Buddha spent traversing northern India, he shared his wisdom with everyone from beggar women to kings. Hundreds of his discourses, or sutras, were preserved by his followers, first orally and later in written form. Around thirteen hundred years after the Buddha’s enlightenment, the sutras were translated into the Tibetan language, where they have been preserved ever since. To date, only a fraction of these have been made available in English. Questioning the Buddha brings the reader directly into the literary treasure of the Tibetan canon with thoroughly annotated translations of twenty-five different sutras. Often these texts, many translated here in full for the first time, begin with an encounter in which someone poses a question to the Buddha.

Peter Skilling, an authority on early Buddhist epigraphy, archaeology, and textual traditions, has been immersed in the Buddhist scriptures of diverse traditions for nearly half a century. In this volume, he draws on his deep and extensive research to render these ancient teachings in a fresh and precise language. His introduction is a fascinating history of the Buddhist sutras, including the transition from oral to written form, the rise of Mahayana literature, the transmission to Tibet, the development of canons, and a look at some of the pioneers of sutra study in the West.