The Dalai Lama Reflects on Faith in Buddhism and Christianity

AN EXCERPT FROM THE GOOD HEART: A BUDDHIST PERSPECTIVE ON THE TEACHINGS OF JESUS

Jesus proclaimed: “To believe in me, is not to believe in me but in him who sent me; to see me, is to see him who sent me. I have come into the world as light, so that no one who has faith in me should remain in darkness. But if anyone hears my words and disregards them, I am not his judge; I have not come to judge the world, but to save the world. There is a judge for anyone who rejects me and does not accept my words; the word I have spoken will be his judge on the last day. I do not speak on my own authority, but the Father who sent me has himself commanded me what to say and how to speak. I know that his commands are eternal life. What the Father has said to me, therefore, that is what I speak.” [John 12:44–50]

These passages from the Gospel of John seem to be an important section of the Bible. When I read them, the first thing that strikes me is a close resemblance to a particular passage in the Buddhist scriptures in which the Buddha states that whoever sees the principle of interdependence sees the Dharma and whoever sees the Dharma sees the Tathāgata, the Buddha. The implication is that through understanding the nature interdependence, through understanding Dharma, you will understand the true nature of buddhahood. Another point this raises is that simply having a visual perception of the Buddha’s body does not correspond to actually seeing the Buddha. In order to actually see the Buddha, you must realize that the dharmakāya—the Truth Body of the Buddha—is suchness. This is what it means to actually see the Buddha. Similarly, these passages point out that it is through the historical personification of the Christ that you are actually experiencing the Father that he represents. Christ is the gateway to this encounter with the Father.

Here again we see the metaphor of light, which is a common image in all the major religious traditions. In the Buddhist context, light is particularly associated with wisdom and knowledge; darkness is associated with ignorance and a state of misknowledge. This corresponds to the two aspects of the path: there is the method aspect, which includes such practices as compassion and tolerance, and the wisdom, or knowledge, aspect, the insight penetrating the nature of reality. It is the knowledge, or wisdom, aspect of the path that is the true antidote to dispelling ignorance.

Since these passages also seem to point out the importance of faith in one’s spiritual practice, I think it might be useful here to give some explanation of the Buddhist understanding of faith. The Tibetan word for faith is day-pa, which perhaps might be closer in meaning to confidence, or trust. In the Buddhist tradition, we speak of three different types of faith. The first is faith in the form of admiration that you have toward a particular person or a particular state of being. The second is aspiring faith. There is a sense of emulation; you aspire to attain that state of being. The third type is the faith of conviction. 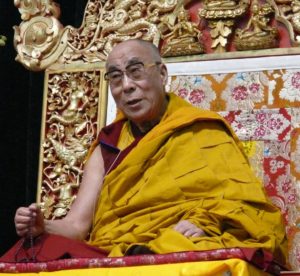 I feel that all three types of faith can be explained in the Christian context as well. For example, a practicing Christian, by reading the Gospel and reflecting on the life of Jesus, can have a very strong devotion to and admiration for Jesus. That is the first level of faith, the faith of admiration and devotion. After that, as you strengthen your admiration and faith, it is possible to progress to the second level, which is the faith of aspiration. In the Buddhist tradition, you would aspire to buddhahood. In the Christian context you may not use the same language, but you can say that you aspire to attain the full perfection of the divine nature, or union with God. Then, once you have developed that sense of aspiration, you can develop a deep conviction that it is possible to perfect such a state of being. That is the third Faith: level of faith. I feel that all of these levels of faith are equally applicable in both the Buddhist and Christian contexts.

In Buddhism we find a repeated emphasis on the need for both faith and reason on the spiritual path. Nagarjuna, a second-century Indian master, states in his famous text, the Precious Garland, that a spiritual aspirant requires both faith and reason, or faith and analysis. Faith leads you to a higher state of existence, whereas reason and analysis lead you to full liberation. The important point is that the faith one has in the context of one’s own spiritual practice must be grounded in reason and understanding.

In order to develop a faith derived through reason or through understanding, a beginning spiritual aspirant should be open-minded. For want of a better word, we can call it a state of healthy skepticism. When you are in that state of openness, you are able to reason, and through reasoning you can develop a certain understanding. When that understanding is strengthened, it gives rise to a conviction, belief, and trust in that object. Then that faith, trust, or confidence will be very firm because it is rooted in reason and understanding. Because of this, we find in Buddha’s own scriptures an admonishment to his followers that they should not accept his words simply out of reverence to him. He suggests that his followers put all of his words to the test, just as a goldsmith tests the quality of gold through rigorous procedures. And it is only as a result of one’s own understanding that one should accept the validity of his teachings.

In this Gospel passage, there is a reference to light dispelling darkness, which is immediately followed by a reference to salvation. To connect these two ideas, I would say that the darkness of ignorance is dispelled by true salvation, the state of liberation. In this way it is possible to understand the meaning of salvation even in the Christian context.

Determining the exact nature of salvation is a complex issue. Among the various religious schools of thought in ancient India, there were many religious traditions that accepted some form of the notion of salvation. The Tibetan word for salvation is tharpa, which means “release” or “freedom.” Other traditions do not subscribe to such notions. Some schools maintain that the delusions of the mind are inherent and intrinsic and are thus part of the essential nature of the mind. In their view, there is no possibility of liberation because negativities and delusions are inherent to the mind and cannot be separated from it. Even among those who accept some idea of salvation, or liberation, there are differences between the actual definitions or characterizations of the actual state of salvation. For example, in certain ancient Indian schools the state of salvation is described more in terms of an external space or environment with positive characteristics, shaped like an upturned parasol.

However, while certain Buddhist traditions may accept the notion of salvation, they view it more in terms of a person’s individual spiritual or mental state, a state of perfection of the mind, rather than in terms of an external environment. Buddhism does accept the notion of different pure lands of the buddhas, pure states that come into being as a result of the positive karmic potentials of the individual. It is even possible that ordinary people can be reborn and participate in the buddhas’ pure lands. For example, from a Buddhist point of view, our physical environment—this earth or planet—cannot be said to be a perfected realm of existence. But within this realm one can say that there are individuals who have attained nirvana and full enlightenment. According to Buddhism, salvation or liberation should be understood in terms of an internal state, a state of mental development. 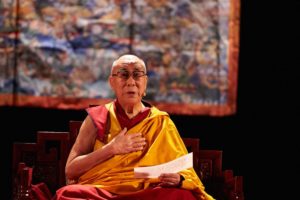 What is the Christian meaning of heaven?

Father Laurence: Heaven is the experience of sharing the joy, the peace, and the love of God to the fullness of human capacity.

The Dalai Lama: So there is not necessarily an association with a physical space?

Father Laurence: No. Only in dreams.

The Dalai Lama: Similarly can one by extension understand the notion of hell also in terms of a very negative, deluded state of mind?

The Dalai Lama: So that means that we need not think of heaven and hell in terms of an external environment?

The Dalai Lama: In the Gospel passage, Jesus says, “I have not come to judge . . . the word I have spoken will be his judge . . . .” I feel this closely reflects the Buddhist idea of karma. There is not an autonomous being “out there” who arbitrates what you should experience and what you should know; instead, there is the truth contained in the causal principle itself. If you act in an ethical or disciplined way, desirable consequences will result; if you act in a negative or harmful way, then you must face the consequences of that action as well. The truth of the law of causality is the judge, not a being or person who is handing out judgments. How would you interpret this?

Father Laurence: There is a poetical metaphor in the Bible in which God punishes humanity for its sins. But I think the teaching of Jesus takes us beyond that image of God as one who punishes and replaces it with an image of God as one who loves unconditionally. Sin remains. Sin is a fact. Evil is a fact. But the punishment that is associated with sin is inherent in sin itself. Instead of emphasizing causality, although that seems logical, I think that a Christian would instead emphasize free will. We have free will in these matters, at least to some degree.

"In the Buddhist tradition, you would aspire to buddhahood. In the Christian context you may not use the same language, but you can say that you aspire to attain the full perfection of the divine nature, or union with God."