AN EXCERPT FROM FALLING IS FLYING

A priceless piece of agarwood was my undoing.

Agarwood comes from the infected heartwood of a family of evergreens indigenous to Southeast Asia. The trees produce a dark resin in response to the attack of a certain mold. Agarwood is prized for its fragrance and used in perfume. It also has extraordinary physical properties: the resinous, crystallized heartwood is tremendously hard and dense—so dense, in fact, that it doesn’t float. In Middle Eastern desert cultures, it is ground into powder and applied in an aromatic body rub. In Asia, there is a tradition of carving agarwood into sacred objects.

A piece of prized wild (as opposed to cultivated) agarwood fetched an astounding $1,000 per kilo in 2010. The agarwood’s value is determined by the age of the tree and the quality and mass of its resinous oil. The original wild population of trees is disappearing, and today agarwood is one of the most valuable natural substances on the planet. And as the wild trees are cut and processed, natural agarwood is becoming increasingly rare.

"A priceless piece of agarwood was my undoing."

In 2006 I visited Putian, in southern China, with my close friend and fellow monk Dahui, where I commissioned three statues to be built for the Hall of Universal Light on the main floor of Mahabodhi, the monastery in Singapore that I was in the initial stages of rebuilding. These huge statues, each weighing several tons, were carved to my specifications from solid pieces of white camphor trees that were said to be 1,400 and 2,000 years old. White camphor was chosen not only for its size but because of its other properties: its strong odor repels insects, fungus, and mold, and it has a medicinal quality and a purity and integrity that resists defilement.

It was at the carvers in Putian that I encountered the agarwood—an impressive piece, about seven feet long, three feet high, and eighteen inches thick. It must have weighed over a thousand pounds. I bent down to take a closer look at its intricate carving of deities, many of which I realized I use in my own personal practice.

One such deity, prominently featured, was Mahamayuri Vidyarajni, a bodhisattva who sits on a white peacock. In China, the peacock represents transformation. It eats poisonous insects and worms, and the more poison it ingests, the more lustrous and radiant its plumage becomes. This symbolizes the way we seek to convert the negativity inside us—the three poisons of anger, ignorance, and greed—into something beautiful, beneficial, and pure. The peacock’s tail, with its multiple halos, signifies the eyes of the bodhisattva who can see in all directions. The thousand-eyed living embodiment of compassion sees everywhere, even into the darkest and most hidden places, wherever there are sentient beings, in order to help relieve their suffering.

"The peacock’s tail, with its multiple halos, signifies the eyes of the bodhisattva who can see in all directions."

Legend has it that Mahamayuri was pursued by hunters who captured him in a net. I recite the mantra that he used to free himself. The net, of course, is the net of suffering in which we are entrapped when we are not mindful.

Another personal deity featured in the agarwood was Ucchusma, which translates from the Chinese as “unafraid of dirt.” He is a manifestation of Shakyamuni Buddha. After Buddha attained enlightenment, the celestials came to pay respects and rejoice—all except one: the Spiral Hair-Knot Brahma King was cavorting with his consorts in his heavenly palace. (A hair knot is twisted, not straight, and represents entanglements.) Outraged that he failed to show Buddha proper respect, the celestials sought to drag the Brahma King out of his heavenly abode. But he made his palace so smelly and foul that no one dared go in. Then, from the Buddha’s heart, Ucchusma appeared. Undaunted by the foul odors and filth, he seized the Brahma King and dragged him down to earth to bow at the Buddha’s feet.

Dahui could tell I was drawn to the agarwood.

“If you like it, get it for yourself,” he said.

“Don’t joke! It’s much too expensive.”

“I know a way,” Dahui said. He asked one of his devotees, a businessman who invested in hotels and textiles, and who also knew me and had heard my teachings, to buy it for me to install at Mahabodhi. The businessman was happy to oblige and accumulate the merit that would accrue from such a generous gift. He purchased the piece for about $60,000 Singapore dollars ($30,000–$40,000 US) and donated it to me.

"The net, of course, is the net of suffering in which we are entrapped when we are not mindful."

Two years passed, and then in 2008 the work was finally completed in Putian on the camphor Buddhas that would sit in Mahabodhi’s main hall. I went to China on a pilgrimage tour with my sangha and asked the manufacturer to send the agarwood to one of my students for safekeeping until the work on the monastery was completed and we could find a suitable place for it. Yet when the monastery was finally finished and the carving was ready to be installed, the ownership of the agarwood was called into question, leading to lawsuits, accusations of financial impropriety, and bogus but nonetheless damaging innuendos of sexual misconduct—which were all widely covered in Singapore’s newspapers.

My name and reputation were dragged through the mud, and I have spent countless hours preparing documents and large sums of money on legal fees to defend myself in the courts. In the midst of all this, I left Singapore and traveled through China. I gave serious thought to giving up the abbot’s position of Mahabodhi. I even considered disrobing. Members of my sangha persuaded me to come back to Mahabodhi, and, strangely, the whole incident has caused me to renew my bodhisattva vows.

The court ruled that the agarwood should be returned to Mahabodhi. I had it installed in the conference room. The agarwood had rapidly appreciated in value and was now worth millions. I have decided to give it to Dahui to sell, to raise money for the charitable work he is doing for children with cleft palates and other congenital disorders in Vietnam.

"Members of my sangha persuaded me to come back to Mahabodhi, and, strangely, the whole incident has caused me to renew my bodhisattva vows."

I have continued my personal practice with the bodhisattva Mahamayuri Vidyarajni, who sits atop a white peacock and freed himself from the hunters’ net, and with Ucchusma, who was “unafraid of dirt” and dragged the Spiral Hair-Knot Brahma King out of his filthy abode to bow at the Buddha’s feet.

I have come to realize that I need to be like the agarwood. Its special properties are produced when the tree’s heartwood is attacked. Life is like that. When you’re bitten, stung, or stabbed you secrete substances to protect yourself. It’s a natural response. And sometimes this can be a precious thing, if we approach this process with the right perspective. Our life experiences sculpt us and make us who we are. This is how we grow, mature, and transform. The peacock spreads his fan. He ingests poison and turns it into luminous halos: our eyes opening to the suffering of others. Falsely accused, branded with depraved behavior and broken vows, I remembered the Dharma of the agarwood. When the tree is attacked, it does not strike out. It turns the poison at its core into something fragrant, precious, and beautiful.

"I have come to realize that I need to be like the agarwood. Its special properties are produced when the tree’s heartwood is attacked. Life is like that."

This article is an excerpt from the book Falling is Flying by Ajahn Brahm and Chan Master Guojun. 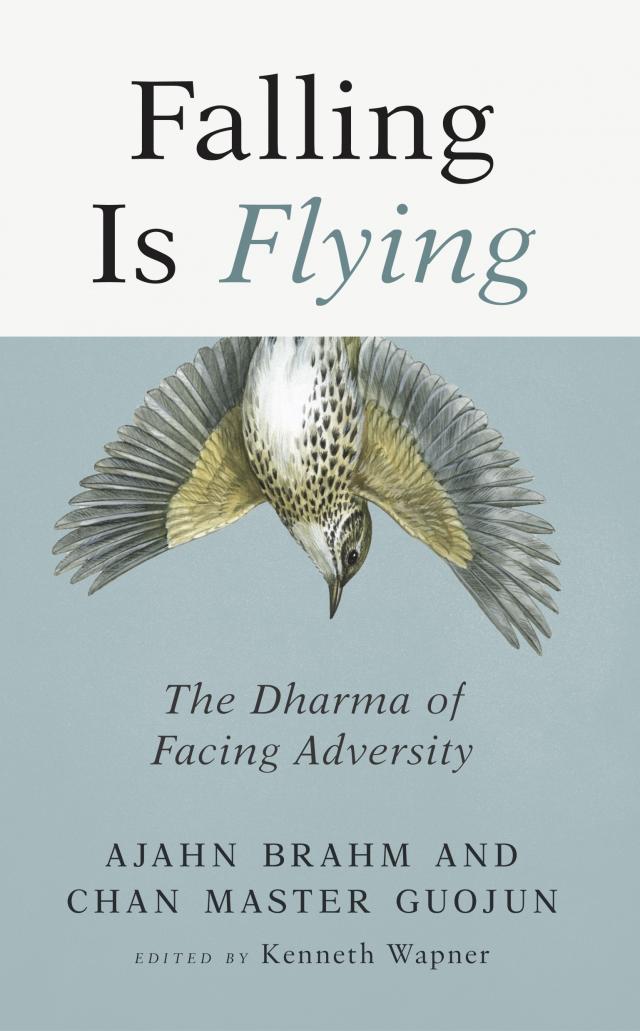 “Instead of trying to discipline your mind with ill will, fault-finding, guilt, punishment, and fear, use something far more powerful: the beautiful kindness, gentleness, and forgiveness of making peace with life.”—Ajahn Brahm

“In free fall, nothing is solid and there is nothing to hold on to. There is no way to control the experience. You have to surrender, and with that surrender comes the taste of liberation.”
—Master Guojun

Ajahn Brahm and Chan Master Guojun—one a teacher in the Theravada Buddhist tradition, the other in the Chinese Zen tradition—share personal stories and anecdotes from their own experiences of dealing with life’s pitfalls. Personal, poetic, instructive, and often laugh-out-loud funny, this is inspiring advice for people from all walks of life.