In this, our 150 episode of the Wisdom Podcast, host Daniel Aitken interviews a very special guests, renowned meditation master Bhante Henepola Gunaratana Mahathera. A Buddhist monk since the age of 12, ‘Bhante G’ took full ordination at age 20 in 1947. He came to the United States in 1968 and earned his PhD in philosophy from The American University. Bhante G has led meditation retreats, taught Buddhism, and lectured widely throughout the world. He is founding abbot of the Bhavana Society in West Virginia, and regularly leads retreats on vipassana, mindfulness, metta, concentration, and other topics. Bhante G has written a number of books, including the now-classic meditation manual Mindfulness In Plain English and its companion Eight Mindful Steps to Happiness.

In this episode, host Daniel Aitken and discuss 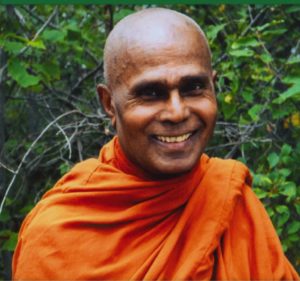 Bhante Gunaratana was ordained at the age of twelve as a Buddhist monk in Sri Lanka, earned his PhD in philosophy from The American University, and has led meditation retreats, taught Buddhism, and lectured widely throughout the United States, Canada, Europe, and Australia. Bhante Henepola Gunaratana is the president of the Bhavana Society in High View, West Virginia, where he lives.