Join Thupten Jinpa for a Wisdom Dharma Chat with host Daniel Aitken on September 21, 2022, at 7:00 p.m. EDT. The conversation will be streamed live over Zoom, and Zoom audience members will still be able to submit their questions via the Q&A feature for Daniel to ask Jinpa during the second half of the event.

Register below to join us on Zoom. 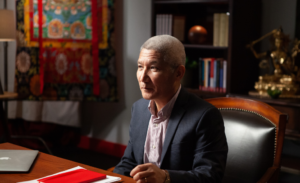 Thupten Jinpa Langri was educated in the classical Tibetan monastic academia and received the highest academic degree of Geshe Lharam (equivalent to a doctorate in divinity). Jinpa also holds a BA in philosophy and a PhD in religious studies, both from the University of Cambridge, England. Since 1985, he has been the principal translator to the Dalai Lama, accompanying him to the United States, Canada, and Europe. He has translated and edited many books by the Dalai Lama, including The World of Tibetan Buddhism, Essence of the Heart Sutra, and the New York Times bestseller Ethics for the New Millennium.
Jinpa has published scholarly articles on various aspects of Tibetan culture, Buddhism, and philosophy, and books such as Songs of Spiritual Experience: Tibetan Poems of Awakening and Insight (co-authored) and Self, Reality and Reason in Tibetan Thought. He serves on the advisory board of numerous educational and cultural organizations in North America, Europe, and India. He is currently the president and the editor-in-chief of the Institute of Tibetan Classics, a nonprofit educational organization dedicated to translating key Tibetan classics into contemporary languages. And he also currently chairs the Mind and Life Institute and the Compassion Institute.