In this episode of the Wisdom podcast, host Daniel Aitken travels to Berkeley, California, to speak with Venerable Ajahn Brahm, a meditation teacher in the Thai Forest tradition and author of many popular books including Falling Is Flying; The Art of Disappearing; and Mindfulness, Bliss, and Beyond. In this conversation, you’ll hear Ajahn Brahm talk about his early interests in theoretical physics at Cambridge University and how this intersected with his interest in Buddhist thought. He talks about the constructed nature of perception and how what we perceive is largely contained within the limits of our own imagination. Ajahn Brahm also discusses what he calls the art of disappearing—namely the relationship between letting go, stillness, and vanishing. You’ll hear him explain how true mindfulness emerges from this place of disappearance as well as its connection to the necessity of higher states of meditation. 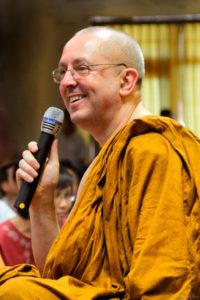 Ajahn Brahm (Ajahn Brahmavamso Mahathera) is a Theravada Buddhist monk. He grew up in London and earned a degree in theoretical physics from Cambridge University. Disillusioned with the world of academia, he trained as a monk in the jungles of Thailand under Ajahn Chah. A monk for over thirty years, Ajahn Brahm is a revered spiritual guide and the abbot of Bodhinyana Monastery in Serpentine, Western Australia—one of the largest monasteries in the southern hemisphere. He is also the spiritual director of the Buddhist Society of Western Australia, and spiritual advisor and inspiration for Buddhist centers throughout Asia and Australia. His winning combination of wit and wisdom makes his books bestsellers in many languages, and on his teaching tours Brahm regularly draws multinational audiences of thousands.