H. H. the Sakya Trichen: Learning from the Lives of Great Masters

In this episode of the Wisdom Podcast, Daniel travels to Tsechen Kunchab Ling in upstate New York to speak with His Holiness the Sakya Trichen Rinpoche, the 41st throne holder of the Sakya school of Tibetan Buddhism. You’ll hear His Holiness share insights from the first volume of his book Freeing the Heart and Mind, as well as his forthcoming second volume. Both books emphasize the necessity of learning the Dharma through the life stories of great Buddhist masters. His Holiness speaks on the practical nature of the sutrayana teachings as outlined in his first book, as well as the life of Mahasiddha Virupa and his key role in the formation of both the Lamdré lineage and the Sakya school at large. His second volume looks at valuable life lessons from the legendary 13th century leader of the Sakya order, Drogön Chögyal Phagpa—namely his relationship with the Mongols and the religious conversion of Kublai Khan. We also hear His Holiness share insights on the nature of samaya in the guru-disciple relationship, as well as his views on restricted teachings and their increased availability in the modern world. 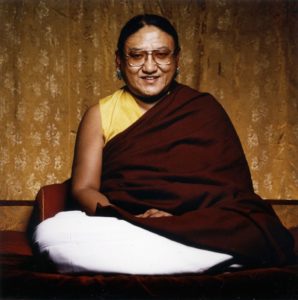 His Holiness the Sakya Trichen is the revered forty-first throne holder of the Sakya school of Tibetan Buddhism, which dates back to 1073. He is a member of the Khön family, who have been important teachers of Buddhism in Tibet since the eighth century. A brilliant master, he manifests profound wisdom and compassion, and his command of English renders his teachings particularly beneficial to students in the West. He was born in 1945 in Sakya, Tibet, and in 1959 escaped with tens of thousands of Tibetan people to India, where he continues to live and work tirelessly to rebuild the Sakya tradition. He has guided the establishment of over thirty monasteries in India and Nepal and has helped found Sakya centers around the world. His seat in North America is Tsechen Kunchab Ling in Walden, New York.

H. H. the Sakya Trichen: Learning from the Lives of Great Masters