Since this is our official 75th episode of the Wisdom Podcast, we thought we would rebroadcast our very first episode in commemoration of this meaningful milestone here at Wisdom. For this special conversation, host Daniel Aitken traveled to Dharamsala, India, to meet with His Holiness the Karmapa, Ogyen Trinley Dorje, leader of the Karma Kagyu school of Tibetan Buddhism. His Holiness talks about many topics, including the efficacy of listening to Dharma classes, receiving empowerments, and taking ordination vows online. He touches on the differences between Tibetan and traditional Western education and how each benefits from dialogue with the other. He further shares some thoughts on how Western Dharma centers could be improved. He speaks on vegetarianism, including anecdotes from his own and his previous emanations’ experiences with vegetarianism. He also discusses his recent involvement planning to re-establish the tradition of full ordination for Tibetan Buddhist nuns.
You can also read H. H. the Karmapa’s book, Interconnected, with a Plus or All Access membership to the Wisdom Experience. Start reading here. You can purchase the hardcover version of Interconnected here and the paperback version here. 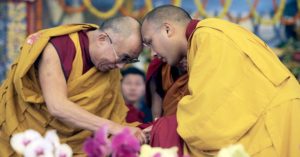 His Holiness the Karmapa, Ogyen Trinley Dorje, is the head of a 900-year-old lineage and one of Buddhism’s most important spiritual leaders. He is known for his eloquence—grounded in rigorous Buddhist education—in advancing universal human values. He is the seventeenth incarnation in the Karmapa lineage, which dates back to the twelfth century. After escaping Tibet in 2000, H. H. the Karmapa settled in India and now resides in his temporary home at Gyuto Monastery. He teaches traditional Tibetan Buddhist Dharma, while also remaining a strong advocate for topics such as environmental conservation, the ordination of Buddhist nuns, as well as the digital preservation of ancient texts.