Lama Zopa Rinpoche: Foundations for the Flourishing of Dharma in the West

In this special episode of the Wisdom Podcast, we are joined by Wisdom Publications’ cofounder and spiritual director, Lama Zopa Rinpoche. Rinpoche is a Tibetan Buddhist scholar and meditator who for 30 years has overseen the spiritual activities of the extensive worldwide network of centers, projects and services that form the Foundation for the Preservation of the Mahayana Tradition (FPMT), which he founded with Lama Thubten Yeshe. Rinpoche is the author of several books including The Four Noble Truths: A Guide to Everyday Life, recently published by Wisdom. In this incredible teaching recorded at the Kurukulla Center for Tibetan Buddhist Studies, Lama Zopa discusses how Buddhism in the West has evolved and changed since the development of FPMT. You’ll hear Lama Zopa offer insights on challenges faced by Western Dharma students, and what is needed in order for the Dharma to flourish in the West. Lama Zopa also shares some of the most profound teachings of Tsongkhapa and offers insights on the subtleties of the imputed “I,” the five aggregates, and the emptiness of the self. You’ll also hear Lama Zopa share stories from his own personal biography—from his escape to India at a young age, to his decision to become a monk, to his key role in the development of FPMT and its creation of over 161 centers worldwide. You can view a video version of this special podcast below, as well as a transcript.

Download a Transcript of Lama Zopa on the Wisdom Podcast:
TRANSCRIPT 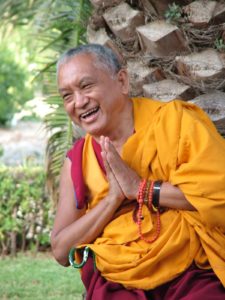 Lama Zopa Rinpoche is one of the most internationally renowned masters of Tibetan Buddhism, working and teaching ceaselessly on almost every continent. He is the spiritual director and cofounder of the Foundation for the Preservation of the Mahayana Tradition (FPMT), an international network of Buddhist projects, including monasteries in six countries and meditation centers in over thirty; health and nutrition clinics, and clinics specializing in the treatment of leprosy and polio; as well as hospices, schools, publishing activities, and prison outreach projects worldwide.

Share This Episode
Previous Episode
Christopher Ives: Zen, Ethics, and the Wildness of Nature
Next Episode
Malcolm Smith: The Seventeen Tantras of the Great Perfection

Lama Zopa Rinpoche: Foundations for the Flourishing of Dharma in the West