In this episode of the Wisdom Podcast, host Daniel Aitken speaks with Mark Van Buren, author of A Fool’s Guide to Actual Happiness, published by Wisdom. Mark is a specialist in mindful living, yoga, and meditation, and has been promoting health and wellness for over a decade. Beginning with a meditation class in high school, Mark has found himself encountering Buddhist teachings and practices with increasing frequency throughout his life.

In this episode, you’ll hear Mark share anecdotal stories from his early years as a practitioner in the Chan tradition, including a humorous retelling of one of his first experiences at the Dharma Drum Retreat Center. He speaks candidly about various pitfalls along the way—like feeling the need to impress his teacher and being preoccupied with spiritual breakthrough in his practice—and explains his growth as a practitioner over the years, shifting from attempts to erase his problems to allowing himself to sit with discomfort instead. He shares his experiences with transformative practices in the Chan tradition, such as koan and hua tou practice, silent illumination practice, and his favorite, the practice of asking “who am I?”

You will also hear Mark flesh out the concept of “actual happiness” as a kind of joy or equanimity separate from the constant striving to fulfill one’s desires. Mark and Daniel discuss this subtle tension between goal-driven progress in meditation and the practice of letting go, and how to think about this tension both on the cushion and in daily life. Using stories drawn from his work, he illustrates how he uses techniques from these practices to coach patients, encouraging them to invite unpleasant feelings in rather than struggling against them. Finally, Mark explains his hopes for expanding his teaching into a full-time pursuit in order to reach more people and eliminate suffering at a larger scale.

To hear more from Mark, you can connect with him on Facebook, Instagram, and Twitter. He also runs a Mental Hygiene Movement Facebook Group to assist people in staying connected and consistent with their meditation practice. 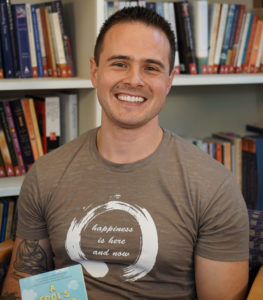 Mark Van Buren is a Mindful Living Trainer, yoga/meditation instructor, personal trainer, and musician, that has been promoting health and wellness for over a decade. He writes articles on meditation and yoga for My Yoga Online, Gaiam TV and Elephant Journal. He has run dozens of workshops and retreats all over the tri-state area, and has been asked to speak at numerous colleges including Columbia, Montclair State, and Bergen Community. A handful of yoga studios have already opened their doors to his message, allowing him to give talks and run guided meditations and retreats. Van Buren holds a Bachelor of Arts in religious studies from Montclair State University and two Associate Degrees from Bergen Community College in exercise science and music. He is currently the owner and head instructor of Live Free Yoga Studio in River Edge, NJ.