For this episode of the Wisdom Podcast, host Daniel Aitken speaks with returning guest and author Venerable Thubten Chodron about her latest book with His Holiness the Dalai Lama, In Praise of Great Compassion. This is the fifth volume in the Library of Wisdom and Compassion series, which continues the Dalai Lama’s teachings on the path to awakening.

Ven. Chodron has been working on this series for the past decade in consultation with the Dalai Lama as a set of foundational teachings that help contextualize Tibetan Buddhist teachings for those coming from a Western background. You’ll hear her describe the process of compiling and writing these texts, including the experience of sitting through multi-day interviews with the Dalai Lama, geshes, and translators. She and Daniel then dive into the content of the newest volume in the series. They discuss and compare the four immeasurables across multiple Buddhist traditions, before turning to various conceptions of what it means to become an arhat versus a buddha, as well as the role of compassion in generating bodhicitta.

Ven. Chodron is the abbess and founder of Sravasti Abbey in Newport, Washington. She has practiced the Buddha’s teachings for over thirty-five years, and has studied extensively with His Holiness the Dalai Lama, Tsenzhap Serkhong Rinpoche, Lama Zopa Rinpoche, and Lama Thubten Yeshe, among many other Tibetan masters.

Learn more about the book and course Buddhism: One Teacher, Many Traditions that Ven. Chodron says started the Library of Wisdom and Compassion series. 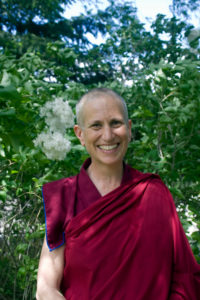 Venerable Thubten Chodron is an author, teacher, and the founder and abbess of Sravasti Abbey, the only Tibetan Buddhist training monastery for Western nuns and monks in the US. She graduated from UCLA, and did graduate work in education at USC. Ordained as a Tibetan Buddhist nun in 1977, she has studied extensively with His Holiness the Dalai Lama, Tsenzhap Serkong Rinpoche, and Kyabje Zopa Rinpoche. Ven. Chodron teaches worldwide and is known for her practical (and humorous!) explanations of how to apply Buddhist teachings in daily life. She is also involved in prison outreach and interfaith dialogue. She has published many books on Buddhist philosophy and meditation, and has co-authored a book with His Holiness the Dalai Lama—Buddhism: One Teacher, Many Traditions. Visit thubtenchodron.org for a media library of her teachings, and sravasti.org to learn more about the Abbey.